The Azores, as already highlighted, are an archipelago that has 9 major islands, divided into three groups: eastern, central and western. Coming from Europe, the first airport you will encounter is definitely Ponta Delgada, on San Miguel. From there there is an internal network of flights operated by the Azores flag carrier – Azorean Airlines, alias SATA Airlines. This is a short guide on how to move around in the Azores

From Ponta Delgada, Azores Airlines flies to each island with different frequencies depending on the importance of the island itself (for example for Corvo, which is the smallest there are only two flights per week, for Terceira several per day). In some cases, the connections between the islands provide stopovers (for example, from Sao Miguel to Flores, a stop is made in Terceira, or Faial) in any case, the flights last between 30 and 50 minutes maximum. 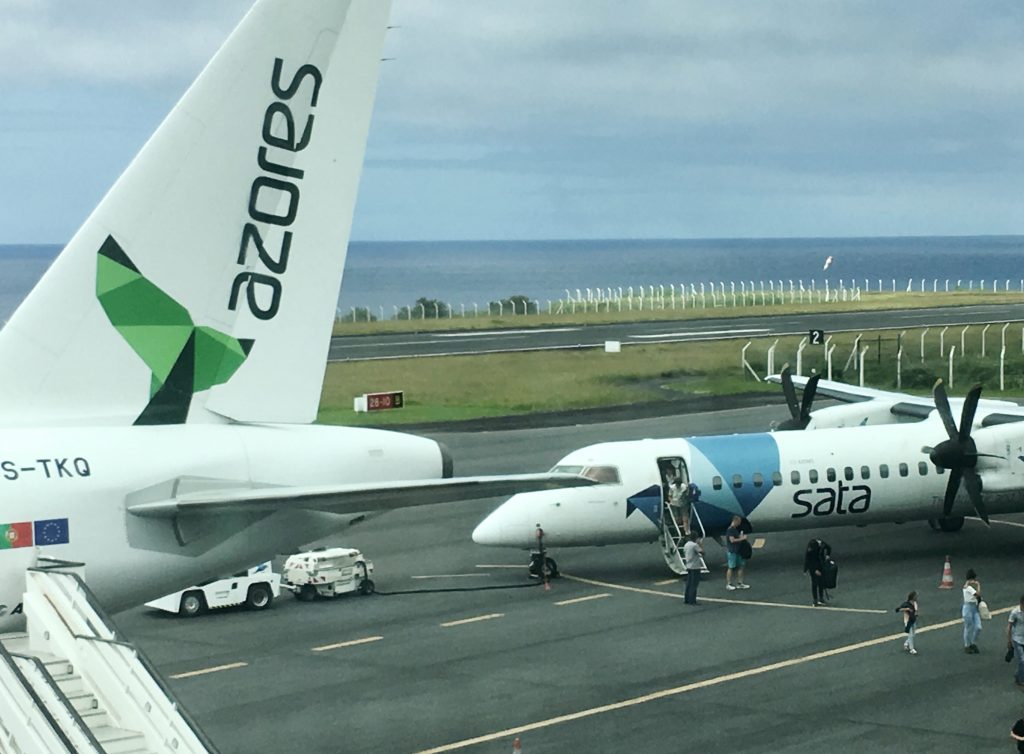 Any stopovers look more like changing buses rather than an airplane, boarding and disembarking operations are quick and stress-free.

SATA (Azores Airlines) is an excellent company, with safe and regular flights. Unfortunately also a little expensive, though. Flying from one island to another, on a beautiful day, offers a priceless panorama and the arrival in the small but highly organized airports is an event in itself. No crowds, no queues. Excluding the peak months, it is even possible to take a rental car from the various agencies “on the fly”, without even booking.

A less expensive alternative are ferries. (Atlanticoline). Between the three islands of the central group (Faial, Pico and Sao Jorge) they operate all year round, while among the other islands they are seasonal (we are still in the middle of the Atlantic!). Here too, just show up a little earlier and in time to have a coffee the Ferry is ready to welcome you. You can take the car between the various islands, or choose to leave it, take the ferry as passengers, and then once you reach the next island, rent another one. Keep an eye on the high season, booking in this case is a must, especially on the smaller islands where the number of cars available is limited. 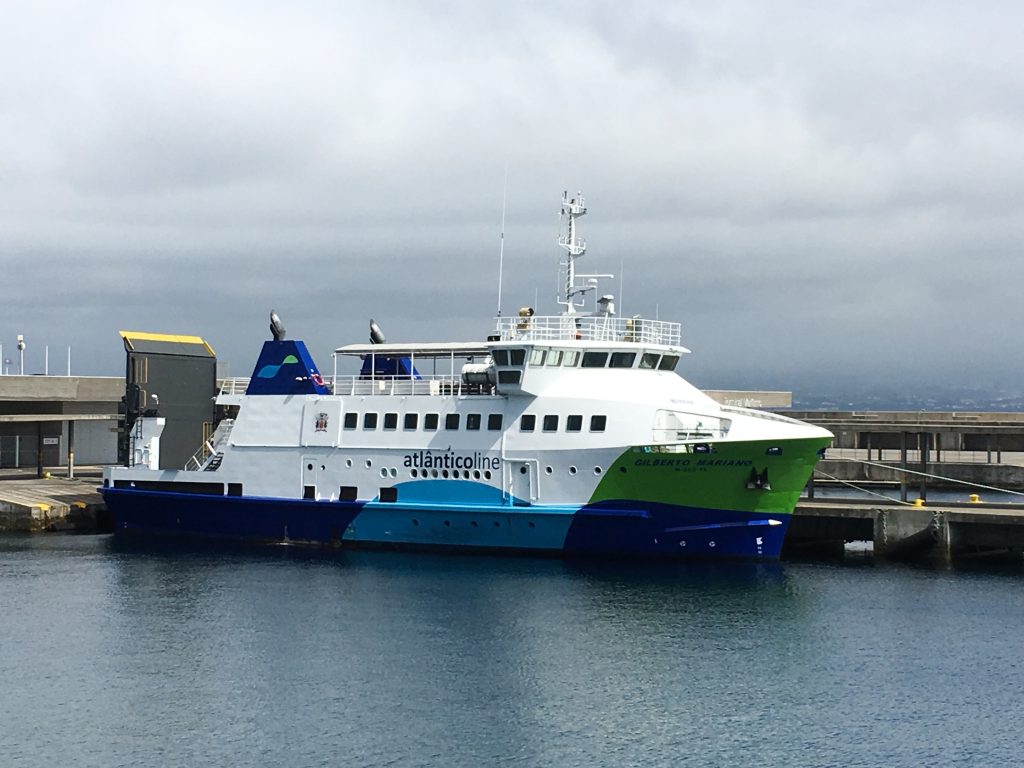 The following diagram tells you which ferries operate between the various islands and the seasonality of the passes: 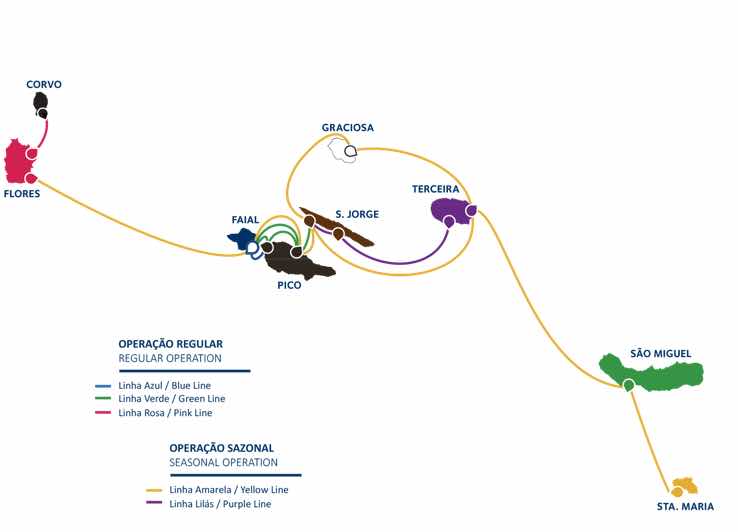 Renting a car is very straightforward, the airports are small and uncrowded, the rental agencies (both international like Hertz and local ones like Ilha Verde) are present and efficient. The only advice is to book in advance if you arrive in high season (July, August, September), as there are not many cars available. In the other months there are no problems usually. Just get off the plane, go to an agency kiosk, provide documents, signatures and the car is ready. All in a few minutes and usually without queues or stress. The islands are visited, but nothing comparable to the mega tourist places where you have to elbow! 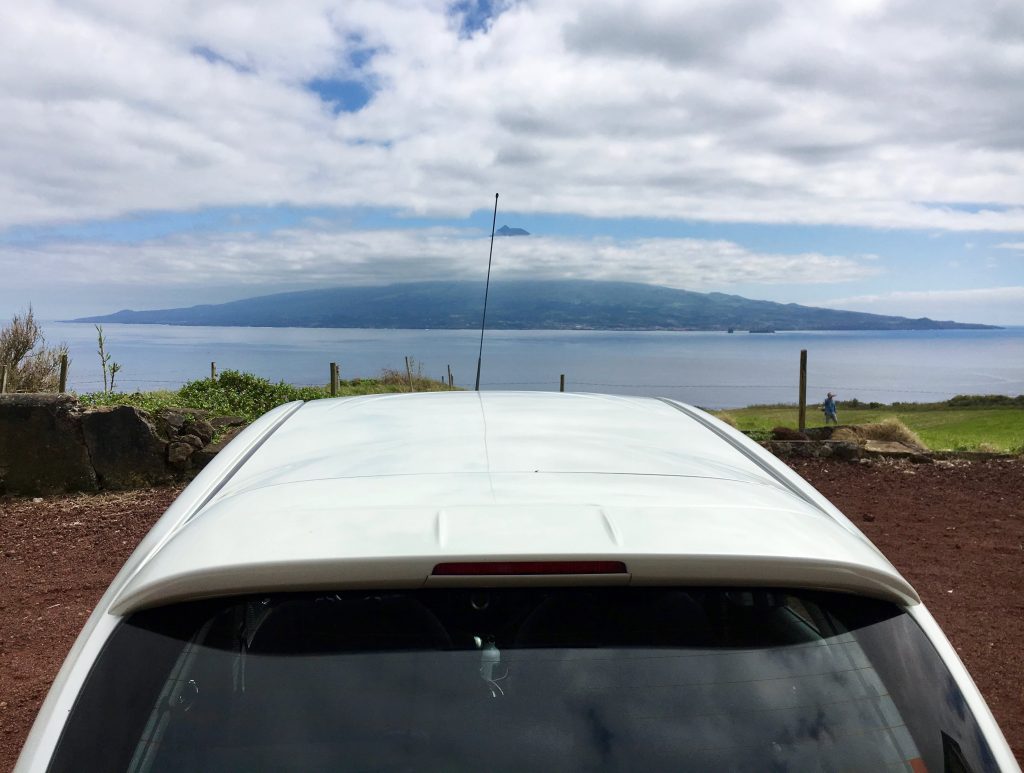 The roads are nothing short of excellent and with little traffic. The only risk here is getting distracted because of the breathtaking views, so take turns driving!

All islands except Corvo have public bus and taxi transport. Rental cars are available in the eight main islands at affordable prices. Taxis and private tourist services are available on the island of Corvo.

In Ponta Delgada there are “Mini-buses” that cover the city center.Various bus lines cover the entire island and are probably the fastest, cheapest and most ecological way of getting around. There are three lines operated by three different companies. The buses are rather slow, but given the small size of the island, the routes rarely last more than 90 minutes. They are usually not crowded and are very clean.Buses travel the main road and are easily accessible from the main sites of Ponta Delgada. Bus services within the city are operated by small minibuses with the larger city. Both services are accessible along Avenida D. Infante Henriques. Timetables are available at bus stops and the tourist office.

Buses travel between major cities on weekdays and bus timetables can be found at the tourist office of Angra do Heroismo or Praia da Vitória.

There is a bus that goes around the island every day from Monday to Friday, and leaves at 11:45 from the stop near the central tourist office.

There is a bus from Madalena at 8.45am which travels along the north coast of the island, and then returns at 11.00am. Another bus leaves at 12:25. and return to Madalena along the south coast, arriving at the ferry docks at 3 in the afternoon.

Only on Wednesdays and Fridays is it possible to go from Velas to Calheta and return along the north coast road. The bus leaves from the square in front of the church of Velas at 08:30 and from Calheta at 15:00 for the return.

On Monday, Wednesday and Friday there is a bus from Lajes to Santa Cruz which leaves at 09:00 in front of the town hall. The journey takes about 40 minutes. The return bus leaves Santa Cruz at 3:00 pm.

A bus line goes around the island from Vila do Porto