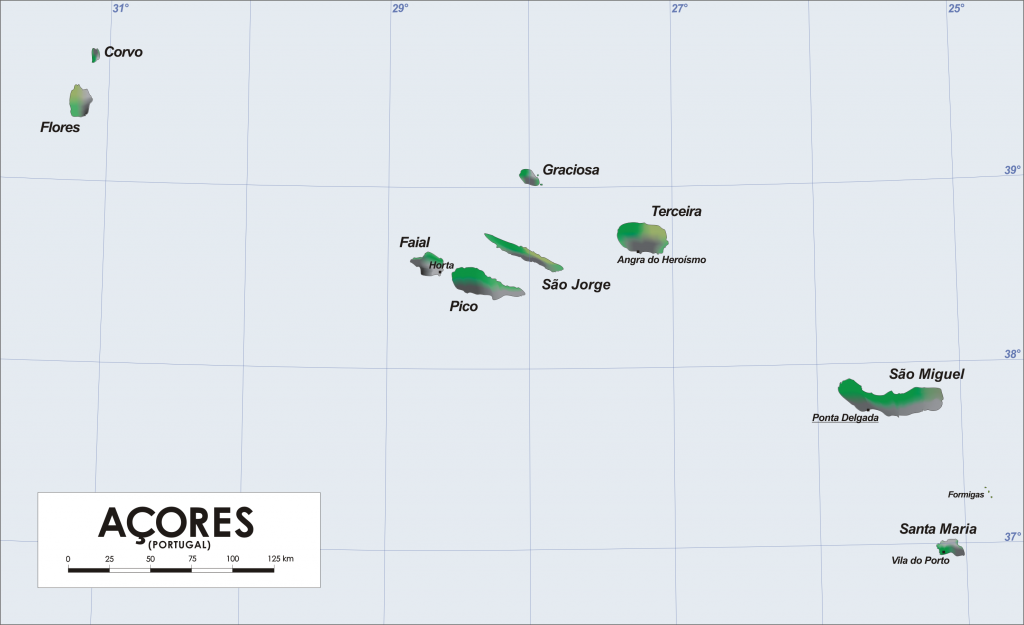 The Azores islands (Açores in Portuguese) are an archipelago made up of nine beautiful islands of volcanic origin located in the North Atlantic Ocean. The archipelago is an autonomous region of Portugal and has a total area of around 2350 km², a number of inhabitants of around 250,000 and a low population density (around 105.76 inhab./km²).

The official language of the Azores islands is Portuguese, but thanks to the emigration to America and subsequent return home from many, English is also very popular. The archipelago’s economy is mainly based on agriculture, breeding, fishing and, more recently, tourism.

Together with the other Portuguese archipelagos of Madeira and Cape Verde and the Spanish archipelago of the Canaries, the Azores Islands constitute the biogeographical region called Macaronesia. The name Macaronesia derives from the Greek μακάρων νῆσοι (makàrōn nêsoi) and means Islands of the blessed, or Fortunate Islands.

The origin of the Archipelago is mainly volcanic, as evidenced by the numerous craters and cones now partly green. The islands were formed in the Tertiary, relatively recently. The Archipelago is located at the intersection of the African, Eurasian and American tectonic plates. The movement of the tectonic plates causes a fracture of the earth’s crust which, following the lava flow, creates ocean ridges. The Azores are in fact located along the mid-Atlantic ridge that crosses the ocean for 16,000 km from the south to the north of the world.

The youngest island of the archipelago is Pico, with its mountain-volcano of the same name which is also the highest peak in the whole of the Portuguese territory (the Azores islands can actually be considered among the highest mountains on the planet if you measure the their height from the base on the bottom of the ocean). The oldest island is Santa Maria, having formed about 8 million years ago. The most recent eruption, that of the Capelinhos volcano on the island of Faial, took place in 1957: volcanic activity has significantly increased the size of the island in its west part.

The islands that make up the Archipelago of the Azores Islands are nine and are divided into three main groups:

The nine islands of the Azores archipelago occupy a total area of emerged land of approximately 2,400 km2. and have an area ranging from 17 km² on the island of Corvo, in the far west of the archipelago, to 759 km² of São Miguel, to the east, the closest to Europe together with Santa Maria.

The volcanic nature of the Azores islands has left significant and unique traces on each island: extinct and active volcanoes, cones and craters, volcanic lakes, fossils, caves, fajãs (lava plains leaning to the sea), waterfalls … Traveling and moving from island to island the other of the Azores means discovering nine different realities: despite their common origin, each of them have particular and specific geomorphological characteristics from which a strong identity derives for each island.

These specific identities are well summarized by the different color associated with each of them: 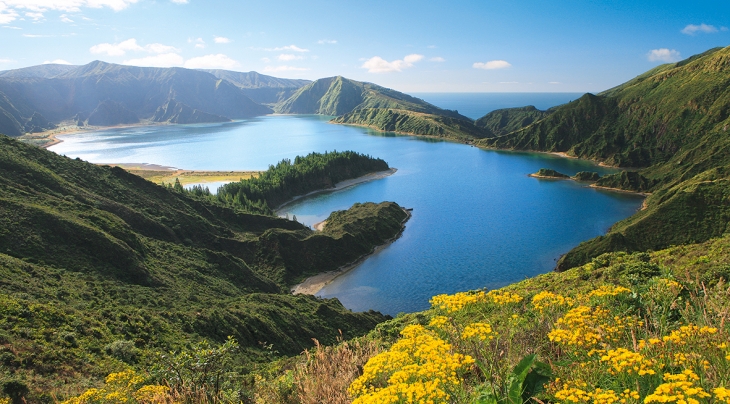 It is the largest island, 759 km². It is called “Green Island” for the landscape formed by its large meadows and forest spots. Thanks to its kilometers wide volcanic craters, this is where the largest lakes (lagoas) of the Azores are found… 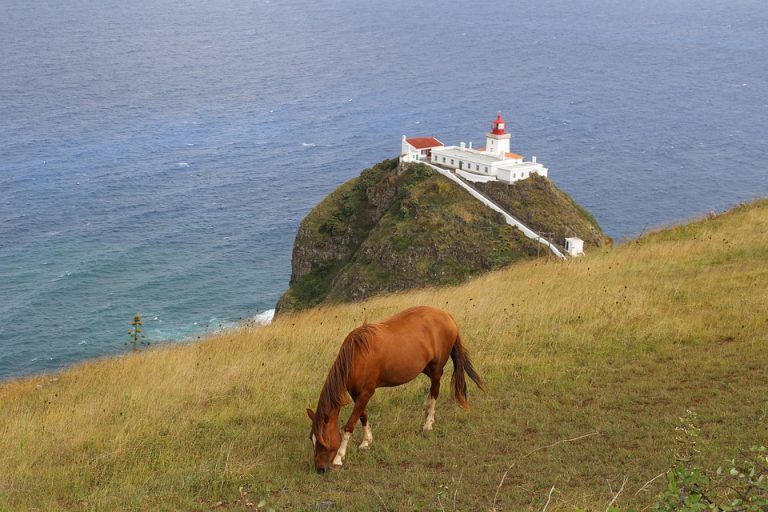 Santa Maria is the oldest island. It is called “Yellow Island” because it enjoys a warmer and less rainy climate than the other islands, thus presenting a drier vegetation, which takes on the yellow tones. It is one of the few, along with Faial, where black and white beaches are frequent … 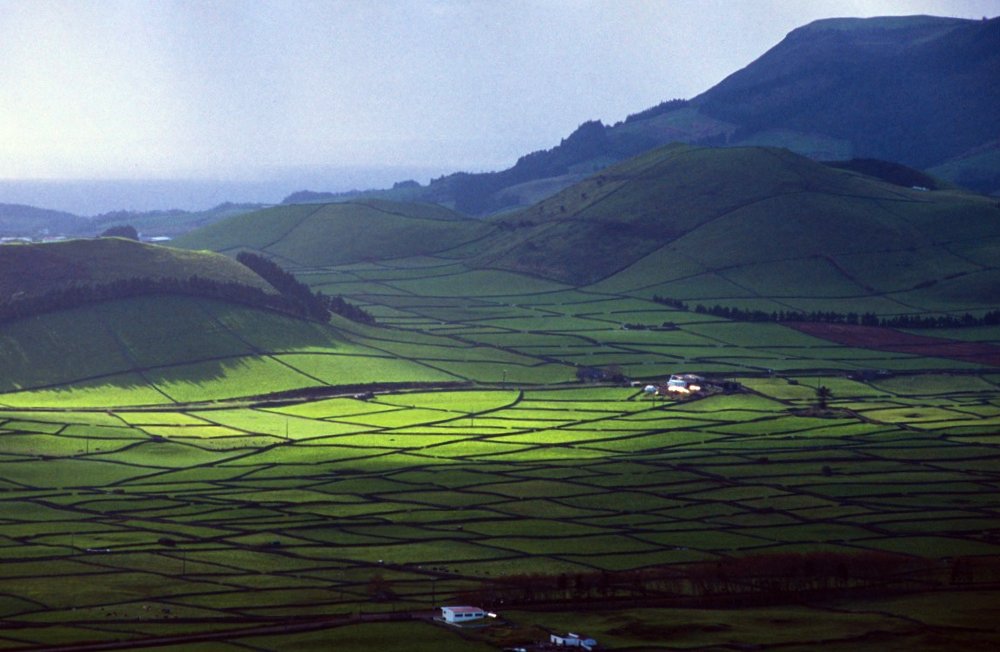 Of practically circular shape, it is called «lilac island» because in its central part, where there is one of the largest craters in the region, and in the north part, there is the largest heather patch of the Azores, typical endemic vegetation of the ‘archipelago…

Read the full article on Terceira 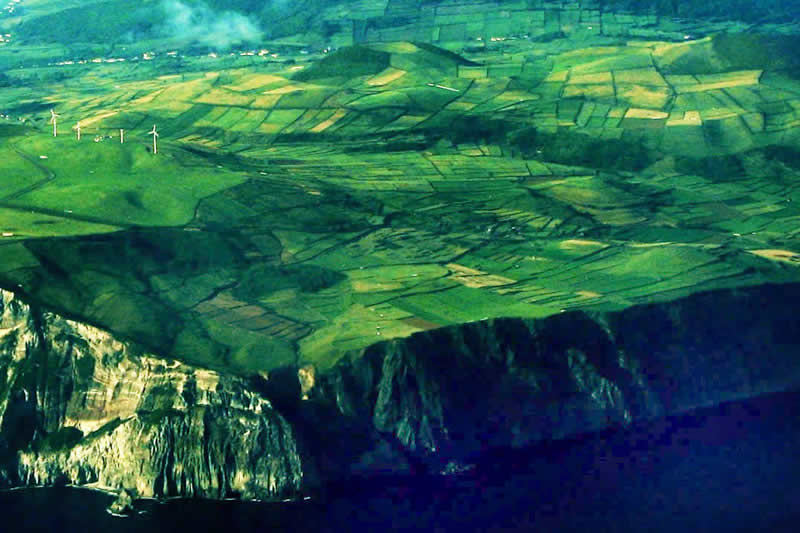 The second smallest island in the archipelago, is called “White Island” due to the presence of a particular volcanic rock, trachyte, which is quite common on the island, which over time takes on a whitish color.

Read the full article on Graciosa 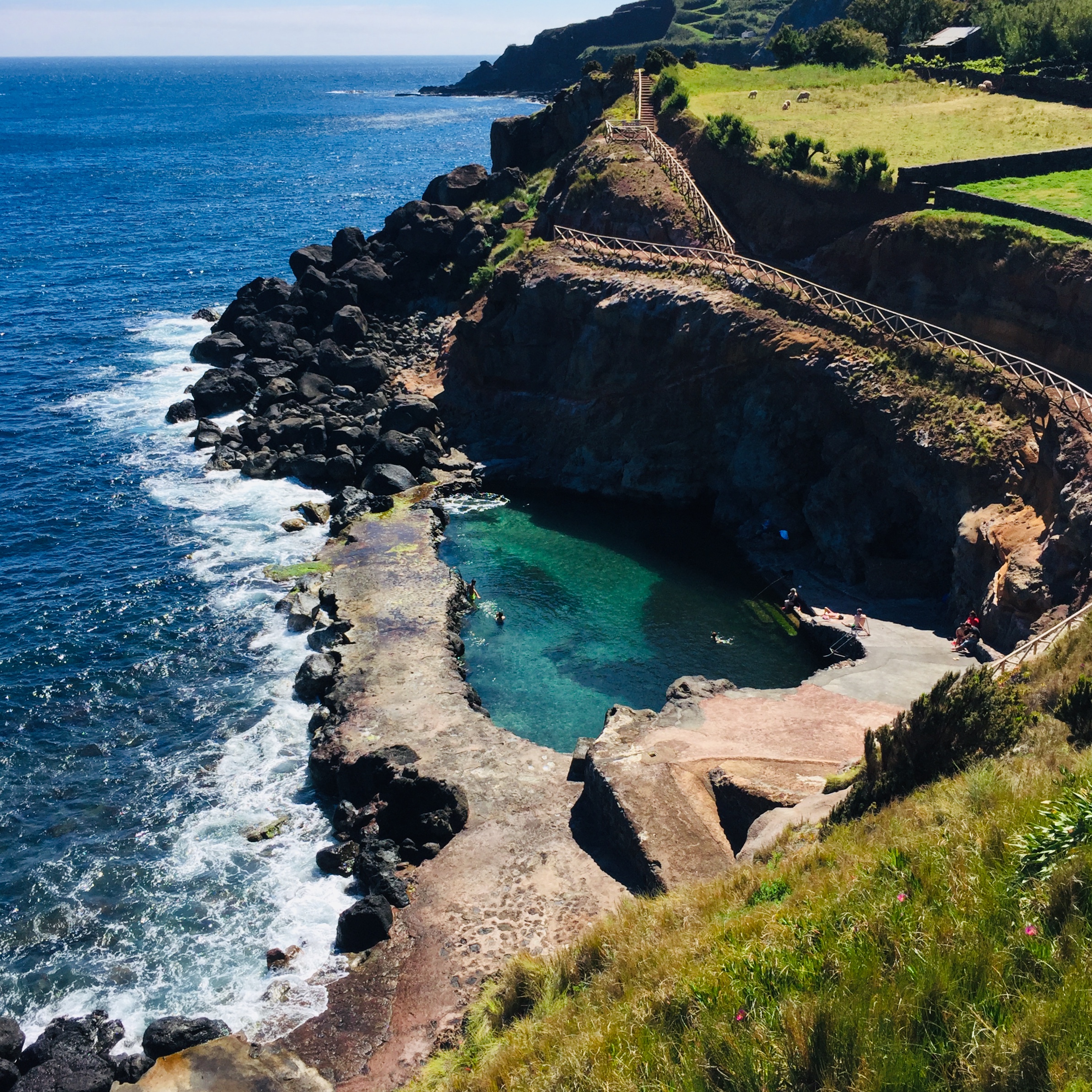 It is also called “brown island”. Its long elongated shape along which, in the central part, volcanic cones follow one another, making it look like a huge prehistoric marine animal emerging from the waters of the ocean. The island is bordered by steep cliffs overlooking the ocean that alternate with small and characteristic flat areas at sea level, the famous fajãs of São Jorge. The island is one of the vertices of the so-called “triangle” of the Central Group: the others are the islands of Faial and Pico. 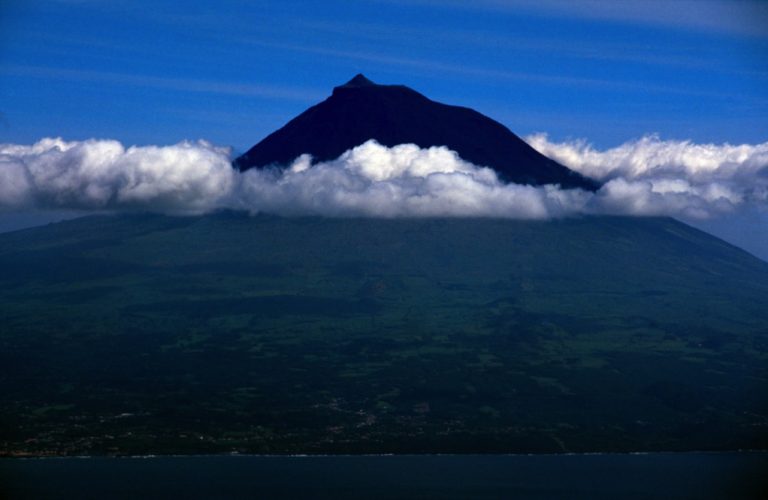 Pico is called “Gray Island” because its large lava fields, the dry stone walls that divide the vineyards (UNESCO heritage), the stone mountains in the fields are all mainly of this shade, always enlivened by the lush green of the vegetation. Its greatest attraction is the Pico volcano: 2,350 m high, 19 kilometers in diameter, the third largest volcano in the Atlantic. The island is one of the summits of the so-called “triangle” of the Azores: the others are the islands of Faial and São Jorge …

Read the full article on Pico 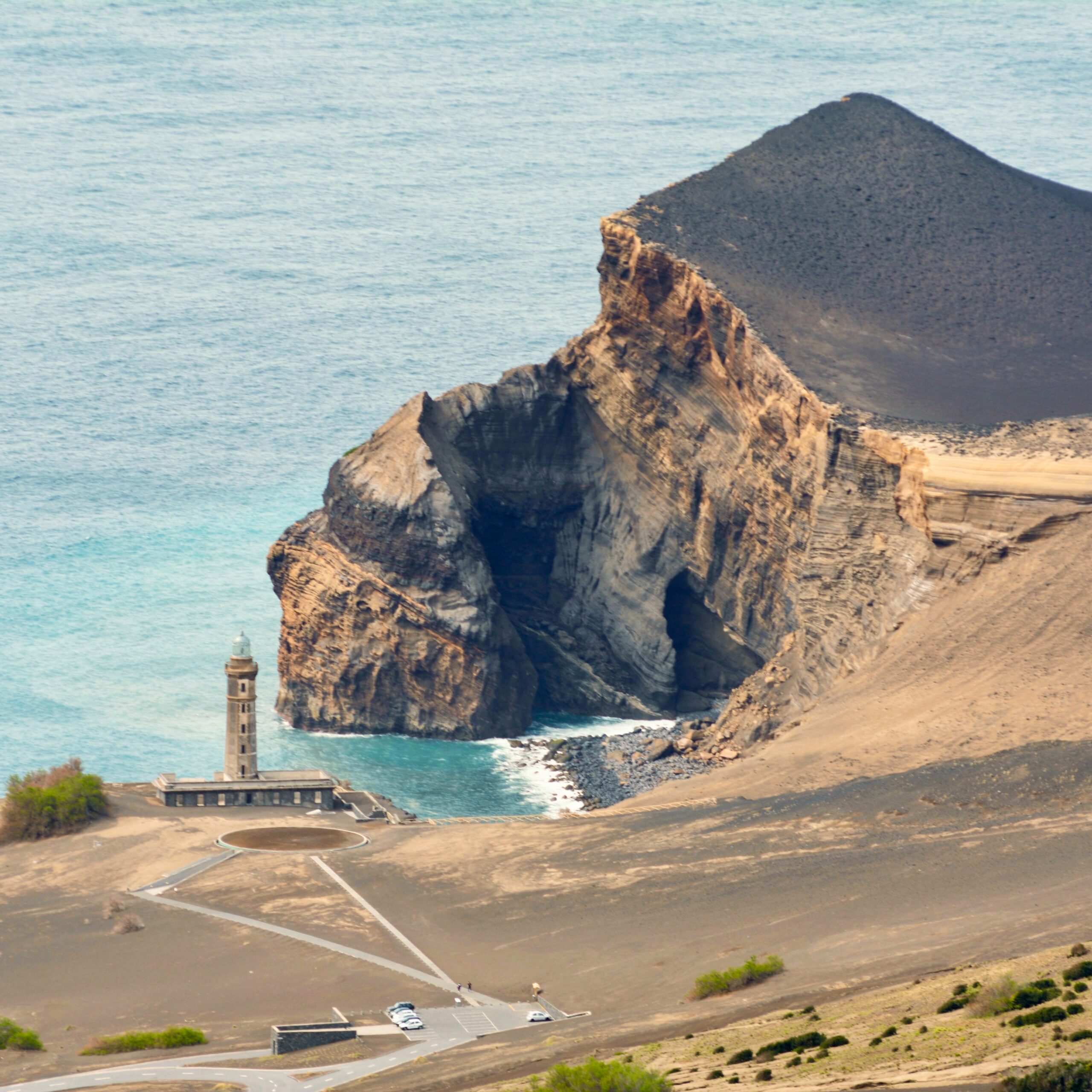 Faial is called “Blue Island” because of the profusion of hydrangeas that cover a large part of the island, from the coast to climb up to the large and impressive Caldeira (Cabeço Gordo). The west area near the Capelinhos volcano, where the landscape is arid and wild, almost lunar, is of great contrast. Despite its volcanic nature in Faial there are numerous sandy beaches. Faial is the westernmost summit of the so-called “triangle” of the Central Group together with the islands of São Jorge and Pico.

Read the full article on Faial 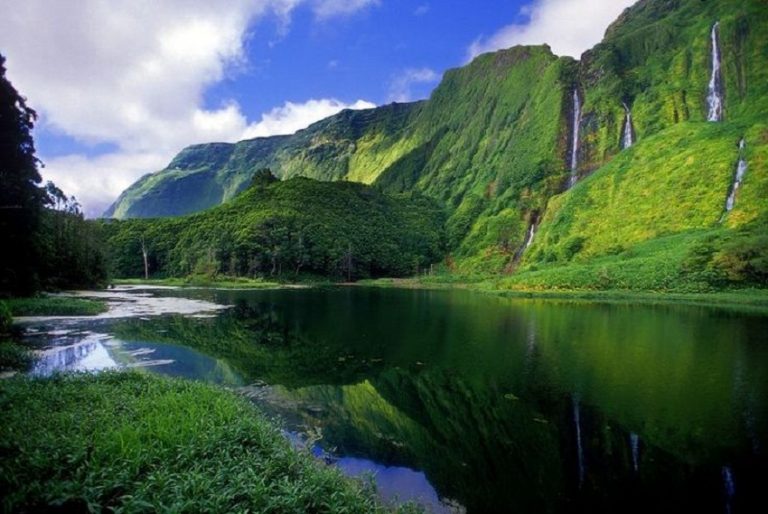 It is called “Pink Island”. The landscape of the island is characterized by numerous craters, lakes and streams that feed a luxuriant vegetation in which the pink of hydrangeas and azaleas mainly stand out. The island contains seven volcanic craters, now lakes, and offers one of the most famous natural monuments of the Azores, the Rocha dos Bordões: a set of large basalt columns of great spectacle …

Read the full article on Flores 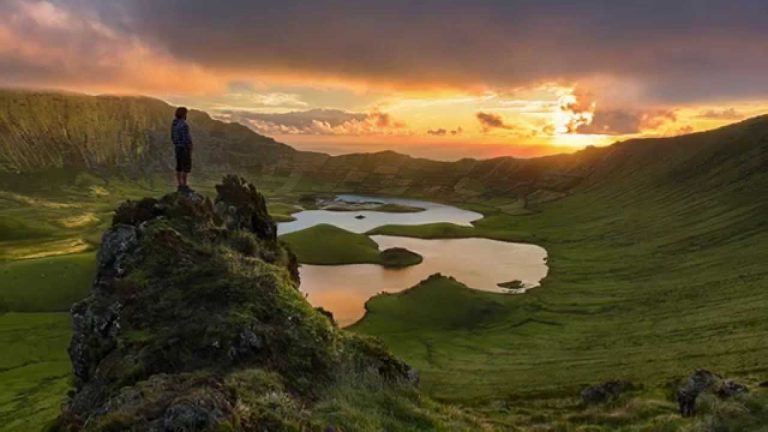 The smaller island, called “Black Island” and is formed by a main volcanic complex, with an overlying crater (Caldeirão) and about twenty secondary cones on the sides and inside the crater. It is therefore a “volcano island”, unique in the archipelago with these prevalent characteristics …

Read the full article on Corvo

More From: About the Azores