Corvo Island is the smallest island in the Azores at 6.24 km long and a maximum 3.99 km wide

Corvo’s sighting, by the Portuguese navigator Diogo de Teive, must have occurred around 1452, at the same time as the island of Flores was discovered.

Given its size, the small territory did not attract the attention of settlers who came to populate the Azores. Its almost pure natural state only changed in the mid-16th century, when the capitão-donatario (a kind of governor) Gonçalo de Sousa sent a group of slaves to Corvo, probably originating from Cape Verde, with the order to devote himself cultivation of the land and breeding. Around 1580, a contingent of settlers from Flores increased the local population.

Life in Corvo was peaceful, marked by the rhythms of agriculture, fishing and breeding, which guaranteed the existence of the community. But, contrary to what one might suppose, the geographical position of the island allowed it to overcome its imaginable isolation. In fact, Corvo defined the border line for the Portuguese naval armies, which went there to receive ships from the various points of the Portuguese and Spanish empires, and then escorted them safely to continental Europe. So the isolation was broken in the late sixteenth century, and throughout the seventeenth century, often also by pirates and pirates in search of loot and hostages. In Corvo they found a strong resistance, and in fact the defeat suffered in 1632 by Barbary pirates who came from northern Africa remained historic. The population rejected the attack with stones, and the legend tells that in the hard and unbalanced battle the patroness of the places intervened, the Madonna of the Rosary, who “deflected all the shots fired by pirates and returned them, multiplied, towards the ships of the Moors, managing to put them on the run ”. Since then his name became Nossa Senhora dos Milagres (‘Madonna of Miracles’).

The courage of the people of Corvo was again demonstrated in 1832, when a group of ravens went to Terceira to ask for the relief of the heavy taxes paid to the lord of the island and to the Crown. The minister of King D. Pedro IV, Mouzinho da Silveira, who was there to organize the liberal struggle starting from Angra, was impressed by the slavery situation experienced by the inhabitants of the small island. He proposed the cancellation of the cash taxes and the reduction of the wheat tax to half. In that same year the village received the title of citizen, and went on to be called Vila do Corvo.During the eighteenth and nineteenth centuries, American whalers began to frequent the coasts of the islands of the Western Group. Some ravens were recruited for whaling, and earned their reputation as brave harpoons. In 1864, Corvo had almost 1,100 inhabitants, but since then the population began to decline gradually. Between 1900 and 1980, Corvo went from 808 to 370, mainly due to emigration to the United States and Canada.

The inauguration of the Corvo aerodrome in 1983 was crucial for the modernization of the island’s structures, and in 1991 the establishment of regular routes to Flores, Faial and Terceira decreed the full integration of the island in the dynamics of the archipelago . Agricultural activity, centered on cattle breeding, is currently the cornerstone of the local economy.

The whole island of Corvo corresponds to a main volcanic building, with an overlying crater (called Caldeirão) and about twenty secondary cones on the sides and inside the crater. It is therefore a “volcano island”, the only one in the archipelago with these characteristics.

In the landscape, the green of semi-natural pastures predominates, with dark stone walls that segment the properties. Here and there you can see basalt haystacks, also used to store agricultural tools. The landscape has low forest density: you can see some specimens of heather and laurel from the Azores (locally designated as zimbros, that is junipers), and there are various orchards, especially in the eastern part of the island. Cultivated fields are located around Vila do Corvo, the only inhabited center. Trying to support the socio-economic development of the island and its people, centered on the conservation of the environmental and cultural heritage, the Corvo Biosphere Reserve was created in 2007.

Caldeirão is the main landscape element of the island, born from the collapse of the top of the central volcano. The crater has an elliptical shape, with a maximum diameter of 2.3 kilometers and a depth of 305 meters. Its interior is occupied by a shallow lake and various small volcanic cones that cut out the body of water (many say that they reproduce the design of the Azorean islands). From the Caldeirão viewpoint you can observe the vast volcanic depression and enjoy the silent calm that characterizes this remote point of Europe.

Vila do Corvo is located in a lava plain which constitutes the main flat surface of the island, and which originated from the basaltic lava emitted by Morro da Fonte, a scoria cone that dominates the inhabited center. The flow that forms this flat area is currently more visible along the coast, especially in the form of coastal lava strings that develop between Portinho da Areia and Ponta Negra, also having a clear underwater expression (the so-called caneiros, the place of choice for divers who frequent the island). The last eruptive episode occurred precisely here, between 80,000 and 100,000 years ago, and originated the basaltic lava flow that develops between the area of Pão de Açucar and Alto dos Moinhos.

The whole island is surrounded by high and steep cliffs, mainly in the western and northern sectors, due to the strong marine erosion to which the detrital nature of volcanic products is subject. This erosion originates important breakages and landslides, and reveals the basaltic veins that cross the main formations, forming a dense, complex and capricious network of intrusive forms.

A boat ride around the island is an unforgettable experience, revealing the most inaccessible areas and allowing you to observe wonderful landscapes, a large number of sea birds and some marine vertebrates, including dolphins and whales.

An internationally known paradise for ornithological observation, Corvo is the habitat of species such as the sea swallow, the greater berta (Calonectris diomedea borealis) and the pigeon of the Azores. The migratory birds of North America also come to look for food on this dot of land in the middle of the ocean, and here they rest after the long crossing.

Underwater activities are experiencing a great development, given the abundance of excellent spots and thanks to the effort to preserve the diversity of existing fish species. Boat trips around the island are activities available to the visitor. You can swim on the Praia da Areia beach and in Porto da Casa. The island is very suitable for walking or cycling.

Vila do Corvo, the only inhabited center of the island, is a knot of narrow streets, which are so narrow to better protect themselves from the strong winds that often make themselves felt on the island. 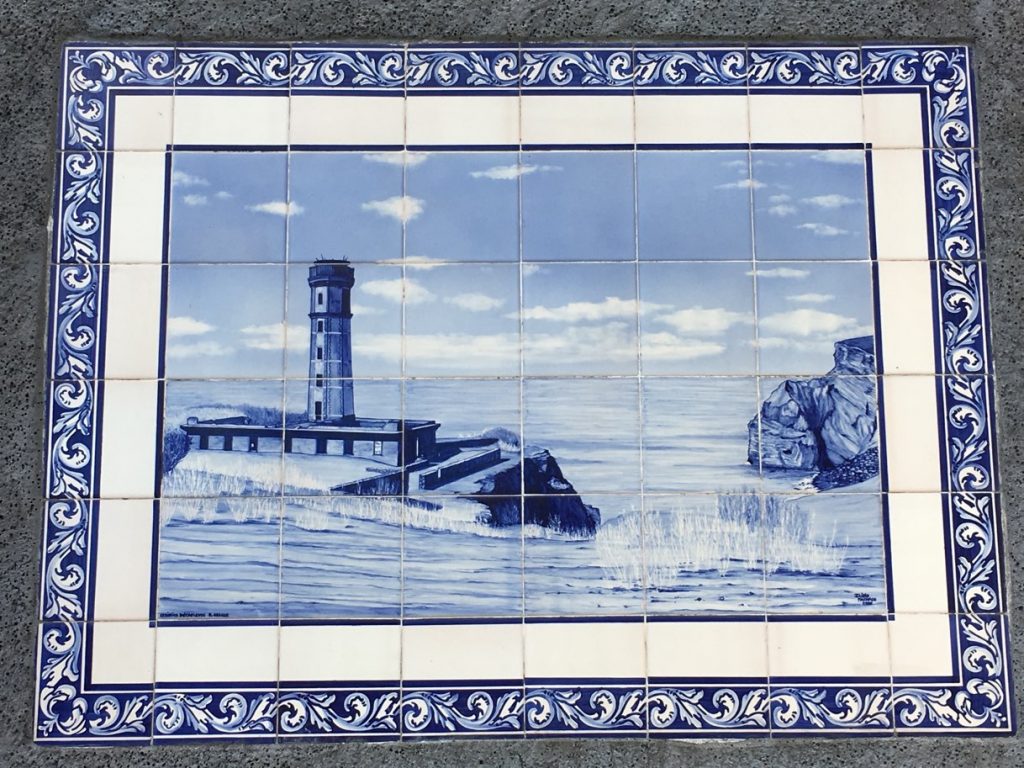 The dark stone sidewalks are lined with whitewashed houses, but some black basalt houses still survive. Largo do Outeiro functions as the center of the resort, and it is here that ravens and visitors gather around the stone benches to share daily episodes or ancient stories. The main church, dedicated to Nossa Senhora dos Milagres, has the facade facing the ocean. Erected in 1674 and rebuilt in the 18th century, it houses a Flemish statue of the patron saint of the island.

At Alto dos Moinhos, near Ponta Negra, small conical-shaped windmills adorn the shore of the sea, and dot the blue horizon of the coast with white which, at a distance, is interrupted by the outline of the island of Flores. A mechanism rotates the wooden dome, so that the sail can accompany the wind direction. These buildings are still a vivid example of the importance that the production of wheat and corn had on this island.

The Corvo Environmental and Cultural Interpretation Center, recently built occupying some typical houses, is a compulsory stop. In this modern infrastructure, in addition to creating a pleasant and informal conversation, you can learn a lot about the island and its peculiarities, the raven character and the local way of life.

The wooden locks, still manufactured today by the craftsmen of Corvo, are the symbol of the way of life of a peaceful island, where everyone knows each other. In addition to being useful, they represent the most typical handicraft product of the place. Women engage in work such as lace, embroidery and objects made of shells.

Despite the scarcity of population, the feast of the Holy Spirit is still alive, and takes place around the garish império of Vila do Corvo, dated 1871. On August 15 an outdoor party takes place, and some religious ceremonies are dedicated to Nossa Senhora dos Milagres. Integrated into this festival, the Festival dos Moinhos brings together the bands of other islands to the local philharmonic during two very animated days. The closure of the summer holidays is in September: another outdoor party that takes place after the procession in honor of Nossa Senhora do Bom Caminho (‘Madonna of the good way’).

The local gastronomy is mainly based on the freshness of the products extracted from the sea or collected from the land. Especially noteworthy are fish and seafood.

The corn bread produced on the spot accompanies typical dishes such as the “rock grass” tortelli (erva do calhau). It is an alga that is collected precisely from the rocks, and from which salt water is extracted. After being chopped and minced, it is mixed with eggs and flour, forming balls which are then crushed and fried in lard.

Following a recipe called couves da barça, or even couve and marrã, the pork preserved in salt is left to soak from the day before, and is then boiled together with the chopped cabbage, potatoes, onion and garlic. The dish is served with sweet potatoes and corn bread.

The artisanal Corvo cheese is highly appreciated, with a minimum maturation of 60 days. Semi-hard and yellowish in color, it has a persistent flavor and a slight spicy taste.